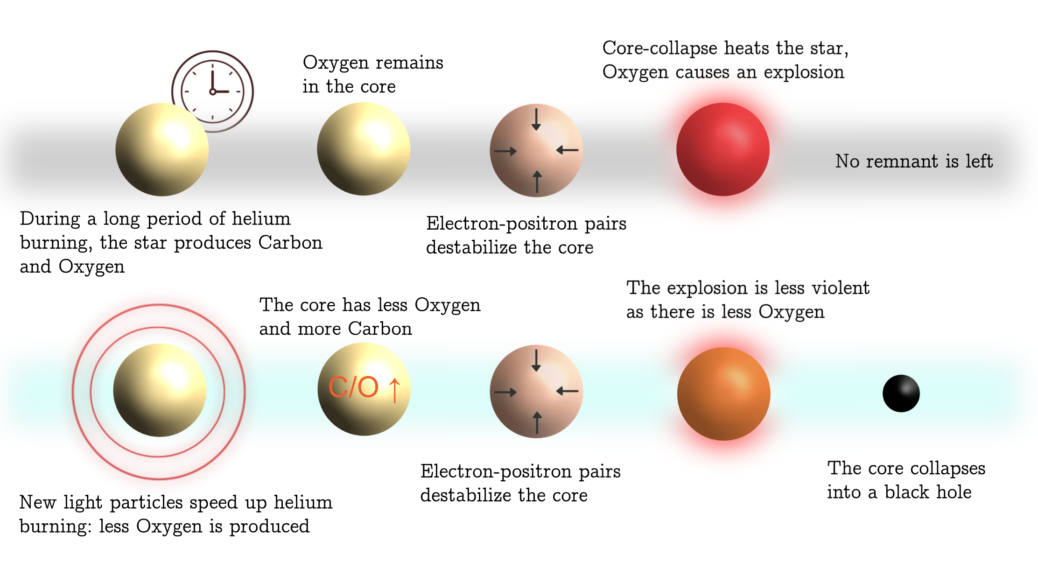 The detection of gravitational waves by the LIGO and Virgo experiments affords us the unprecedented opportunity to examine celestial objects under a new microscope, and to test our theories of nature using the most extreme objects in the universe: black holes.

A few months ago my collaborators Jeremy, Sam and I proposed, for the first time, to use black hole population studies to probe new light particles. An example is the very popular electrophilic axion, which may explain the excess measured in the XENON1T experiment. Let me explain how.

Well, black holes are remnants of old, heavy stars. And it turns out that stellar structure theory predicts the existence of a black hole MASS GAP. That is, there is a large range of masses for which black holes just cannot be formed. To see why, you need to consider the final chemical burning stages of a very heavy star.

What is this danger zone (labeled unstable)? If a star comes near it, the production of electron-positron pairs from the hot plasma is so fast, that the star cannot be supported by radiation pressure anymore and will start to IMPLODE prematurely.

So, what happens to our example stars? As you can see, the 40 solar mass star (the green line) does not come near the danger zone, and proceeds as normal. This star will eventually become a black hole. The 70 solar mass star grazes the zone, and starts to fluctuate. What happens is a sequence of implosions and thermonuclear explosions, shedding mass at every step. We call it a pulsation pair-instability supernova (PPISN) – it results in a lighter black hole. The 120 solar mass star (blue line) enters the danger zone, and the subsequent implosion triggers such an energetic thermonuclear explosion, that all of the material is blown away. This is called a pair-instability supernova (PISN), and it results in NO REMNANT.

The mergers detected by LIGO and Virgo allow us to study masses of black holes in binaries. With that data, we may test our understanding of the mass gap, and therefore of stellar structure theory and nuclear physics. We cited some pioneering papers, check them out!
But, as we showed, we may also use it to test our understanding of particle physics. If new light particles exist and couple to the material in the star, they will change its final stages.

Such particles will act as an additional way to lose energy, accelerating the processes in the supernova in such a way that the pair-instability pulsations become less violent. Therefore, you would expect bigger black holes, within the original mass gap. In fact, this effect would shift the mass gap upwards.

And indeed, performing simulations with the MESA code, that is what we find. Look for example at the image above, for a hidden photon. The stronger it couples to the material in the star, the more the mass gap shifts upwards.

So, we have shown that new particles can be tested through the masses of black holes. Isn’t that cool? We demonstrated the effect with some of the particles on everyone’s mind right now. But that is not all… WE CAN LEARN SO MUCH MORE FROM THIS. Stay tuned for more work, studying more complicated particle dynamics in the stars.

To note, the LIGO/Virgo third observation run has observed many black hole mergers, which has just been released. With the next generation of gravitational wave detectors, the situation will get even better!