Last week, nineteen authors and several supporters united to write a statement from the High Energy Physics (HEP) community, addressing Strumia’s talk at CERN. We collected thousands of signatures from physicists all over the world. I am honoured to have been part of this movement.

Our group came together organically, united in our desire to counter the arguments made in the talk. We all felt that it was very important to make a statement because (prospective) young scientists and the wider public should know that the HEP community does not stand for bad science and veiled sexism.[1]
As most of us know from our own experience, discrimination of any form, everyday sexism, and imposter syndrome are hugely incapacitating. We will not allow people’s aspirations to be curbed by such negative social pressure. And we do not want to allow the incident to contribute to a hostile work environment. We want to let people know that the community is listening, and that we can have conversations about these issues. 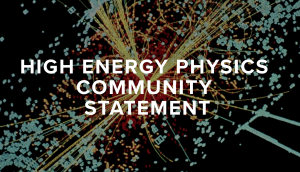 Out of the nineteen authors, I have personally met only five, and before this week, regularly talked to only one. Nevertheless, the group provided a supportive, empowering environment, in which decisions were taken in consideration of all opinions equally. Hopefully, it will hopefully lead to many more powerful initiatives. The work is far from done yet.

In case you have missed it, here a selection of the media coverage that Particles for Justice got:

Gizmodo, Wired, The Volkskrant (in Dutch), and Physics today all featured supportive articles with commentary from one or some of the authors.

The BBC and The Guardian unfortunately chose not to give us a call, even though some of us had reached out to them.

CBC focussed on the Canadian angle and interviewed some of our Canadian signatories.

Active researchers (with our without PhD) in particle physics or affiliated fields can still sign the statement on particlesforjustice.com.

[1] Effectively, Strumia mis-used his academic credentials in high energy physics to make sweeping statements about gender studies. The statement on particlesforjustice.org comments on the scientific errors in the presentation in-depth.