Today the great physicist and mathematician that was Stephen Hawking passed away. I was lucky to have recently met him at a conference at Cambridge titled “Gravity and Black Holes”. 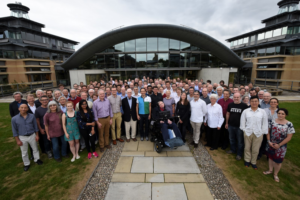 While many can share the joy of having had a chance to talk to Prof Stephen, I cannot say the same about myself. Even though I do not consider myself as someone who gets tongue tied at the mention of celebrities, I did not at the right moment know what to say to him even though I was getting my picture clicked with him and helped click several pictures of him with his friends. 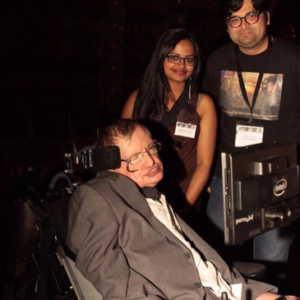 You have to understand, for a young PhD student like me, working on the exact same topics as him, meeting someone like him seems absurd. It could be delightful, but in the climax of all the emotions enveloping you, it just seems absurd. Why? You ask. Well, because, what do you say to someone like him? What do you not say? How do you approach him? How do you know you are not annoying him? Someone might say confidence is the sign of the truly intelligent and if that is so, then maybe I lack in it. But let’s come back to the story, there I was, standing right near him, getting my pictures taken after having humbly asked if that was okay with him (to which his secretary replied with a resounding yes!) and then, not knowing what to say. In the end, I thanked him for his seminal contributions and mentioned that it was very nice to meet him in person. But then I was flummoxed.  By this time, I had heard numerous quotes about his humorous and witty side and sat through talks regarding his earliest designs of the Gravitational Waves detector (and why it failed) as well as on his discovery of the Hawking Radiation. I had heard talks such as “The gravitational memory effect: what it is and why Stephen and I did not discover it” by Gary Gibbons, “Stephen, Gary, and the first gravitational wave detections” by Bruce Allen and “One step forward, one step back” by Gary Horowitz and had been reduced to spits of laughter at regular intervals. I had seen pictures of him bantering with students (and was jealous of all of them). I had (half) read the brief history of time, but fully read his earlier papers. I had watched a movie about him!I had already constructed millions of scenarios and broken sentences in my mind of what to say to him and rejected them as sounding too desperate and silly. And there I was sitting at a dinner in his honour and hearing personal stories about him.

It is all very well in movies and books, where the protagonist just goes up to their role model and just whips out their hand in a handshake and says in a suave manner “I want to be the next you, you know”. But how do you do that in the real world and not come across as a crack pot? Do I go up and discuss how I did not like the misrepresentation of his wife’s book in the movie, “The Theory of Everything”?  Or do I go up and ask him what he thinks of some of my crackpot ideas on space-time?

And so in the end, I settled for wishing him a very good health and thank for his inspirational work and told him that I was nervous having to come up and say something to him. And then just as I saw his finger twitch on his machine and was deciding whether to wait after having rambled on my words in one fast go (my friends would tell you how fast I speak), when his secretary thanked us saying “Stephen is very happy to hear your kind words” and with a wry look of disappointment, I slunk away and went to talk to his students and now amazing researchers in their own right, Fay Dowker and Strominger to discuss some hopefully interesting physics.

For a collection of of articles, videos and scientific papers linked to the work, see here.

This is not to say that everything about this giant must be romanticized, but that maybe someone else come forward inspired by his scientific legacy to inspire millions more in turn.  In fact, we must take the time to remember and thank his amazing wife and partners, for enabling him to reach the potential he has. We should take this opportunity to reflect upon the fact that so many other brilliant people do not have access to the same opportunities. Instead of worshipping people that succeed in spite of their disabilities, we may then enable more people with technology and support.

For me, what I will always remember is the starting of his talk where the motorized voice spat out, “Can you hear me?” which seemed like a voice coming from black holes or aliens from another planet directly reaching out to us to ask if we can hear them yet.

One thought on “About a singular man”