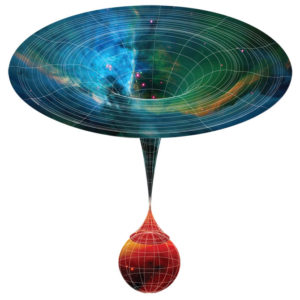 Our cosmological history is full of incredible events, and our future may be as well. In the next few posts, I will explore several potential doomsday incidents, brought to you by theoretical physics. Today we will explore quantum tunnelling and false vacuum decay, and if we should be worried that such a catastrophy lurks around the corner.

What is a vacuum, and what is a false vacuum?
Maybe you remember from chemistry that nature likes to minimize the energy of a system. For example, as the temperature goes down, H2O molecules like to form a solid (ice), as that will cost less energy. More generally, if there are multiple ways a system can be, but one of them costs less energy, chances are that you will find the system in that way. Physicists call that way the vacuum state.

Now, imagine that I start off with a particle somewhere up on a potential slope. What will happen if I let it go, is that it will roll down to the bottom of its potential, to the value at the bottom. 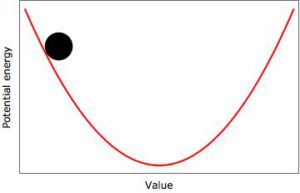 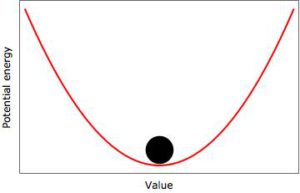 This may seem trivial, but it is actually a very powerful way to predict how particles behave. And it holds for every particle that we know of, because all particles behave by the laws of nature.

Now let’s imagine that our particle has rolled down to the bottom of its potential energy, but it turns out it is not the only minimum. If there is a lower minimum elsewhere, what happens then? 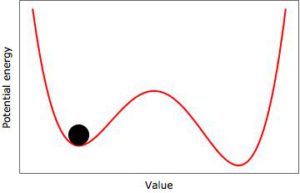 Well, in that case we say that the state is a false vacuum.

What happens to a false vacuum?
This is where it becomes interesting. Physicists before the early 20th century would have said that unless you gave it some push to get over the barrier, the particle would be trapped in the false vacuum forever. Tough luck nature, this is the best deal you get in classical physics! 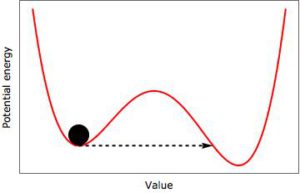 But how do we know the Higgs vacuum we are in NOW is stable?
Well… we don’t. In fact, physicists have good reasons to believe it is NOT stable, and that there is some probability that our vacuum will decay to an even lower vacuum. Such an event which would be catastrophic: it would completely change the Universe as we know it, and it would certainly be the end of humankind. Luckily, there is a subtlety: the probability of tunnelling is so small, that it is very likely to take a very, very long time before it becomes realistic. Much longer in fact than the current lifetime of the Universe. So: we are probably save, at least for another 14 billion years. What a relief, right?

[1] Or, to be more exact, without the probability of finding the particle on top of the barrier ever being significant.

First illustration by artist Kamran Samimi, plots by myself.