As a physicist who once aspired to study fine arts, crossovers between the abstract world of theoretical physics and the imaginative world of the arts are a particularly exciting topic for me. It seems to be quite easy to find examples of artists and writers inspired by science[1] but (to me) the truly intriguing thing would be a synergy, the co-development of a particular way of seeing the physical world. As cutting edge theoretical theories nowadays are often motivated by aesthetics or simplicity (albeit by mathematical symmetry, but that can be seen as an abstraction of symmetry in everyday life), the idea of turning to creative industries to find inspiration does not seem all that far-fetched to me. And it would not be the first time in history either, as I will argue.

My best example of such a cross-fertilisation is in the development of our inquiry into extra dimensions. I’m really excited about this, so I’m going to spread what I want to tell you over a couple of posts. Let me start with introducing how extra dimensions are used in physics.

You may think: We do not experience them, so why would you bother? And that would be a pretty good question at this point. One answer is that physicists are always thinking about unifying theories: our holy grail is a Unified Theory of Everything. As the name suggests, this theory should explain everything[3]: all fundamental forces, and all fundamental particles. We like the idea so much, we even have an acronym for it: ToE. And extra dimensions turn out to be very useful attributes of ToE candidates. I’ll try to give you an example of why.

The particles we have measured in our particle colliders have very different properties like mass, and size, like the stars in this plot: 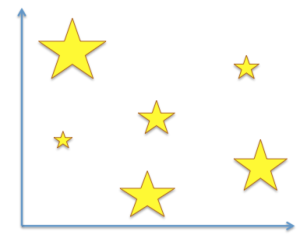 The stars seem like different objects, because they have different size. But when we add a dimension to this plot, we can all of a sudden explain this difference: 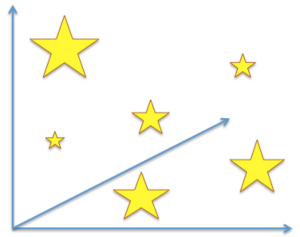 The stars can now be interpreted as the same object, but with different location in the new dimension. Of course, the reality is a little bit more complicated (for instance because we are more interested in mass than in size differnces). But in principle the basic concept is the same. This is also why we look for indirect evidence for extra dimensions by measuring particle properties very precisely.

Hopefully it is a little clearer why the idea of an extra dimension appeals so much to physicists (not just because we like Sci-Fi!). But while they are pretty popular attributes of our modern physical theories, we cannot claim to have been the first to investigate them. Ideas about hidden worlds in new dimensions had a life in the minds of writers and artists, long before they were developed in physics! I hope you are as curious about the topic as yours truly, because I will take you on a tour in the following posts.

[1] Here are a couple of examples: Symmetry movie, Arts@CERN, No Belles play

[2] Because we cannot see them! But also because they may also not modify our (well tested) inverse square laws: Coulomb’s law for the attraction or repulsion between charges, and Newton’s law of Universal gravitation.

The version of these laws taught in schools is manifestly in (1+3) dimensions, but one can generalise them quite easily to (1+D):

Then all you have to do is to measure gravitation, or the attraction between charges, and you can test what “D” is. And this gives you D=3 spatial dimensions.

[3] Well, everything a particle physicist cares about.

2 thoughts on “Adding dimensions with art and prose (1)”