I grew up with two cats that were convinced they were smarter than me, and I am not sure they were wrong. They would gaze at me arrogantly from an elevated height, and I was never any competition for the best spot on the couch. Cats have always seemed like intriguing creatures to me, and in my imagination they would have an un-understood intelligence and insights that us humans lack. Noting their omnipresence in theoretical physics, I am not alone in my captivation.

Let me start with the example that probably came to your mind immediately. In the most illustrative gedanken experiment[1] of quantum mechanics (QM), Erwin Schrödinger proposed putting his cat in a box with a radioactively triggered poison. The poison would have a 50% chance of killing the cat, and an equally large chance of leaving it unharmed. To the observer outside of the box, none and both of these options would match reality before opening the box and inspecting the cat: reality would be a superposition of these states. Taken literally this seems like a cruel experiment, but it is an accurate description of the subatomic objects particle physicists (such as yours truly) care about.

Another scientist/inventor inspired by his cat is Nikola Tesla (remember him from last post?). As a toddler, young Nikola never went unaccompanied by his furry friend Macek, and the two sparked each other’s curiosity (as he would later recall in his memoires). As it will, during a cold and dry winter day, the Croatian air built up a static charge, and so did Macek’s fur. As Nikola stroke him, he later wrote, his back was like a sheet of light and sparks would come off his hands. If you have ever held your hand on a Van de Graaff generator, the effect must have been similar. The experience had a huge impact on the young boy: he has always insisted that it fuelled his enormous curiosity for understanding electricity (which has made much of the current world possible[2]). 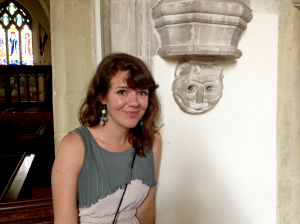 This is a photo of me next to what is said to be Lewis Carol’s inspiration for the Cheshire cat in Alice in Wonderland. Full of deep questions and excursions into mysterious worlds, the books are a delight to many physicists, and the cat plays a central role. The reader and Alice experience its strange separation from its own facial expression,

“Well I’ve often seen a cat without a grin… but a grin without a cat is a most curious thing,”

which seems awfully reminiscent of the strange phenomena in QM. In particular, the Quantum Cheshire Cat experiment separates neutrons (the cat) from their spin (its grin).

So exactly as anticipated, you can find notable imprints of cats on theoretical physics (without even getting started about their remarkable capacity of always landing on four feet). I cannot resist a comparison with dogs: loveable creatures as well, but in terms of their impact on physics, surely inferior to cats. Dogs offer consolation; cats offer curiosity. If cats are smarter than us all I still cannot tell you; but even the biggest (dog loving) sceptic must admit they have been a big source of inspiration.

[1] This is a smart way in which physicists say thought experiment.

[2] Tesla is most accredited for his contributions to the alternating current electricity supply systems, which you will have in your home and office.