As a female theoretical physicist, I often wonder: if I were a black hole, what hairdo would I choose? Amusingly enough, some of the brightest minds in my field cannot work it out, and therefore jury is still out: bald, hairy, or with a wig, perhaps?

It all started with the no-hair theorem, a name coined by the recently deceased physicist Jacob Berkenstein (remarkably enough, himself with hair until a very late age). By “no hair”, Berkenstein meant “essentially featureless”: in General Relativity[1] you can describe a black hole mathematically with only a couple of measurements: its mass, its electric charge, and its angular momentum (how fast it spins around its internal axis). So no matter how unique the objects are that it swallows, a spaceship (PI?), Berkenstein’s wig, or my shoe collection, black hole A looks exactly the same as black hole B as long as these three numbers are the same.

But recently black holes have gathered a lot of interest in my community, and with it their hairstyle. The main reason they are such fascinating objects is that gravity becomes stronger than anywhere else we know, and we don’t quite understand what happens when it does. And as I’ve mentioned before, a quantum theory of gravity is theoretical physicists’ holy grail. Now what would be a better place to search for quantum oddities than where gravity is at its strongest?

And so it is that physicists working on quantum theories of gravity like to put wigs on black holes, by modifying Einstein’s theory. There are different proposals to do that, and they are all extremely technical, so I’ll spare you (and myself) the details. They make for interesting conference slides though (these are from Gia Dvali’s talk at COSMO15)! 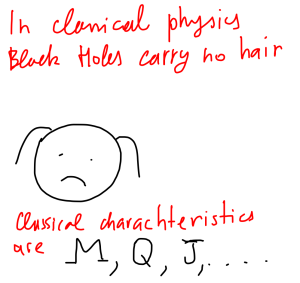 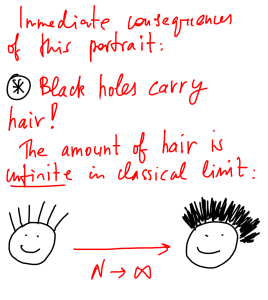 An experimental discovery of these raven locks in the sky could come from direct imaging of growing black holes, or by detecting gravitational waves. Such a detection would cause a shockwave in the community, with a stronger fixation than your favorite hair product ever could: it would be a long sought after observational sign that we can finally take over where Einstein left us. The man was just too brilliant! And he certainly had a good head of hair.

[1] General Relativity (or GR) is Einstein’s theory, and until now our best description of gravity. GR is far from uncontested, but extremely accurate from an observational point of view.