Hello from Canada! I’ve survived my first week in the only ever so slightly mundane town of Waterloo, Ontario. My second Canadian experience has so far been a mix of a pleasant trip down memory lane (I remember the names of the bus companies and cellular providers! I recognise the infrastructure!), an awe of the research institute (if you’d dug up your sack of gold for me to design one, it wouldn’t look much different), and some very effective planning if I may say so myself (bike, lock, basket, helmet, phone plan, painting materials, check! This girl is good to go).

My second fall here, indeed, as I spent an exchange term at the U of T [1] four years ago. As an aspiring physics graduate – though I didn’t know that I would pursue academia at the time – I had certainly heard about the Perimeter Institute (PI) and the people associated with it. I’d seen recorded seminars, too, and they convinced me to come down to Waterloo (a two hour commute from Toronto) to watch a string theory seminar that I of course (as an undergraduate student) did not understand in the slightest. I later convinced a friend to make the same round trip again to go see the opening of PI’s Hawking wing. As the worldly party girl I considered myself to be at that time, the town Waterloo could not impress me much, but even from that limited impression, PI really did.

What’s so cool about PI? First of all, it looks like a giant spaceship with golden windows. Inside the building is light, and there are stairs everywhere, and not always where you expect them, a bit like the ones in the Harry Potter books (except they don’t move… I think). There are corners and nooks with blackboards everywhere, a “silent reflection” room, a space room, a time room, an Alice room and a Bob room[2], a gym. My first week was also the week that Alexa Meade arrived as artist in residence, painting on fruit and people and working away on a giant blackboard. And there is unlimited free espresso. I know what you are thinking: aren’t academic institutions supposed to be poor? Where did all that wealth come from? Indeed, not from academia, but from smartphones, mostly. 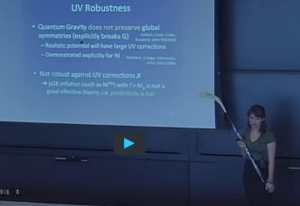 I also gave my first talk at PI, about my own research on particle physics/ cosmology. You can see it here, if you are curious. Hear me out: I got away with using a South Park image as my second slide, they gave me a hockey stick as a pointer, and I was boo’ed at for admitting I do not like Tim Hortons (a coffee brand by an ex hockey player that is adored by all (and only?) Canadians[3]). Oh, Canada, eh?

All in all, I’m looking forward to a hopefully very productive term, fuelled with free espresso and full of reunions with old friends and explorations in the surroundings. With hopefully more gym workouts than poutine (the national dish, I dare you to look that up). And with lots of blogging and creative output. Stay tuned!

[1] By this one means the University of Toronto. Quick quiz: where would the U of W be?