When I started my PhD, we were welcomed with an opening statement which included the statement “you all have one thing in common: you have decided that you do not care about becoming rich”. It raised a few eyebrows around the room, but a few years onwards, I think the assertion was correct – and we are in good company. Let’s have a look at the terrible financial decisions of some of the greatest minds in history. 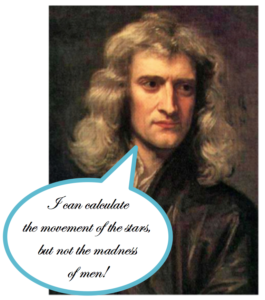 Isaac Newton became a victim of what has been named as one of the first economic bubble crashes. The South Sea Company was founded by the British government in 1711, to consolidate the national debt. The company was given a monopoly to trade with South America, and its stocks rapidly became extremely popular. There was just one problem – South America was not controlled by Britain, but by Spain at the time. When the public eventually understood the unrealistic prospect of favourable returns, the stock prices plummeted – leaving Newton, who had invested a large part of his savings, almost broke. Apparently he did not like to talk about the episode, insisting, “I can calculate the movement of the stars, but not the madness of men.”

Nicola Tesla’s insights transformed the world, with the discovery of the alternating current (AC) and its applications. With these insights, he won the “current wars” from Thomas Edison, who had spearheaded direct current (DC) – a simpler way of transmitting electricity, which is much more prone to power loss. AC made the generation of electricity practical, and affordable for the masses. However, while he won scientifically, Tesla lost in terms of business acumen – he signed off the royalties of AC current to his investor George Westinghouse, walking away from billions he would have accrued. To make it worse, he lost most of his money on the Wardenclyffe Tower project, and died a poor man in 1943.[i]

Albert Einstein’s extraordinary genius transformed scientific research, and he was adorned with a Nobel Prize in 1921 (for his work on the photoelectric effect). Not only had Einstein’s victory been anticipated, the monetary reward had already been promised to his ex-wife Mileva in their 1918 divorce settlement.[ii] However, the father of the theory of relativity, nervous about currency risk and inflation, never honoured the agreement – instead investing (most of) the prize money on the New York stock exchange. And so it is that the second gravitational genius became a victim of the collapse of an economic bubble: in the dramatic Wall Street crash in 1929, much of the prize money was annihilated.[iii]

From these events we may conclude that scientific brilliance and business acumen not always go hand in hand. Perhaps it is something of comfort after your next bad purchase!

[i] The tower would be the very first radio tower, but Tesla was scooped by the Italian inventor Guglielmo Marconi, violating the patent Tesla already held. The US Supreme Court would eventually decide in Tesla’s favor in 1943, after he died.

[ii] This fact has been the topic of much speculation. Although most historians (and scientists) are skeptical about the idea that Mileva was a co-author of Einstein’s principle works, some see this divorce settlement as evidence that she played a crucial part in the works crowned with a Nobel Prize.

[iii] The rest was mostly lost in unwise real estate investments by Mileva, by the way.