In an earlier blogpost, I wrote about how cats have crucially influenced the scientific study of physics. Since then I have become aware of a few other examples of these superior creatures directing our studies. 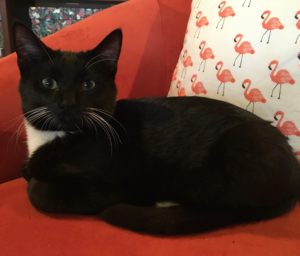 Although people have pointed out that the Earth is round since Pythagoras (circa 500 BC), we may have come to a similar conclusion much earlier if we had paid more attention to our feline friends. The argument is really very simple: a flat Earth has an edge, and everyone knows cats will knock everything off of the edge. Therefore the existence of cats is inconsistent with a flat Earth!

Besides teaching us about the geometry of our planet, cats may teach us about 70% of its surface too. A study recently won the ignoble prize, by rethinking our understanding of liquids. A defining property of liquids (and gasses) is that they fill the shape of the container they are in; as opposed to solids, which maintain their shape. In the study it was found that cats may either be liquids or solids, depending on the circumstances, and likely also the mood of the cat.[1] As we know already, cats take willpower to a whole new level!

In addition to directing humans in their scientific endeavours, cats sometimes choose to directly contribute to science, by authoring a scientific publication. F.D.C. Willard (Chester for friends) co-authored a paper on low temperature physics with his roommate Professor Jack H. Hetherington. Chester must have been frustrated with the job Hetherington was doing and decided to step in. Later, Chester also wrote a single-author paper in French,[2] ridding himself of his inferior co-author.

To me, these examples clearly explain why cats seem to look down on the humans they have to share a space with. Next time you catch a cat’s arrogant stare; remember this blog post, as it probably has good reasons.

Image: my friend Damian’s cat giving me that stare.

[1] For example, if the container is filled with water, the cat may not want to get wet, and choose to behave like a solid.

[2] “L’hélium 3 solid. Un antiferromagnétique Nucléaire” in “La Recherche”. Chester must have agreed with the French that it is a superior language too.