As a true theoretical physicist all I like to think about are abstract laws and mathematical relations. I find it important that my models can be tested empirically, but truth be told, my focus drops exponentially after an experimental setup has been mentioned. While material testing and practical applications leave me lukewarm, I’m very happy that theoretical physics proves useful in modern every day life. And I’m even happier to be surrounded by people that are informed about these applications. So to explore modern physics and innovation, I’d like to post a couple of collaboration/guest-blogs, of which this is the first.

An example of an application of quantum mechanics in renewable energy is quantum dotted solar cells. A solar cell is an electronic device that converts sunlight into electricity. It absorbs sunlight, which generates mobile charge carriers known as electron-hole pairs. Due to the composition of material layers in a solar cell and the generation of mobile charge carriers, both current and voltage are cr 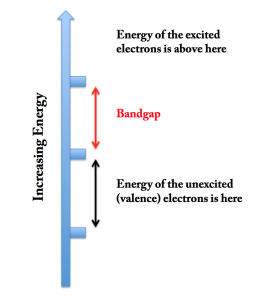 eated. Their product is electrical power.

Sunlight may appear as white, but is actually composed of a spectrum of light with different wavelengths. The wavelengths that can be absorbed by a solar cell are determined by bandgaps: the energy jumps that electrons can make in the material. This is in itself a quantum mechanical property.  The bandgaps of conventional (silicon) cells don’t allow the cells to absorb the full spectrum of sunlight: if the energy of the absorbed light is less than the energy needed to jump, it cannot be converted. This limits the theoretical efficiency of converting solar power to electrical power to 29%.[1]

Quantum dot cells make use of insights from quantum mechanics: because the dots are very small[2], they are sensitive to quantum properties. In particular, the energy levels of the particles become quantized (discrete) instead of continuous, and can be changed by changing the size of the dot. [3] This in turn makes the band gaps of the material tunable. Tuning allows the cell to absorb more light than conventional cells, such that the theoretical efficiency can be raised to 45%.

There is yet another effect: the quantum cells also appear to excite more electrons per absorbed light particle (photon). This in turn also increases the current and the power that the solar cell can produce.

Quantum dotted solar cells are a less commonly known example of how quantum theory can be used to improve the efficiency of modern technology. I hope to discuss more applications of theoretical physics in upcoming posts. If you have a suggestion, or better yet, if you would like to work with me on a guest blog, please let me know!

Luke Boyden is an engineering consultant at OST Energy.

[1] This theoretical limit has not been reached in practice.

[2] The diameter of the dot needs to be similar to the de Broglie wavelength of the electron wave function.

[3] This is called quantum confinement.

2 thoughts on “The Quantum Solar Cell”